"The Nose with Four Legs" 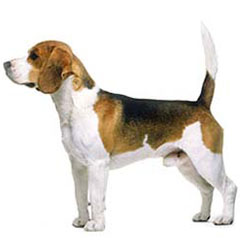 The modern-day Beagle originated in fourteenth-century England, but the breed didn't acquire its name until 1475. That was when a story calledThe Squire of Low Degreewas published, and the unknown author mentioned “begles in that place.” After another hundred years or so, British nobles discovered the joy of hunting rabbits with “pocket Beagles” that were much smaller than today's hound. The rise of fox-hunting (and the resulting demand for larger hounds) caused the demise of the pocket Beagle, but by the 1800s the British had regained their interest in pursuing rabbits with larger versions of the pocket Beagle. Meanwhile, American Beagles were making their marks by hunting game for their owners. By the end of the 1800s, though, both American and British enthusiasts had begun to enter their Beagles in dog shows as well as in hunting trials. Today, the National Beagle Club of America – which formed in the late 1800s – is dedicated to improving the Beagle's performance in both the show ring and in the field. In 2006, Beagles ranked fifth among the 155 breeds registered to the American Kennel Club.

The Beagle is a sociable, easy-going individual who enjoys meeting anyone and everyone – especially children and other dogs. That said, the breed does have an independent streak, and any self-respecting Beagle is inevitably at the mercy of his nose. Owners who want Velcro dogs may be disappointed to find that their Beagle, as much as he loves his people, loves chasing after rabbits, squirrels and interesting smells even more. Aside from injury to the owner's ego, these non-human loves can get the Beagle into serious trouble, particularly if he wanders away from his yard or into the street in pursuit of bunnies, squirrels or other quarry. A good fence that's secured at the base by shrubs or cement (Beagles like to dig, so these anchors are a must) can keep the Beagle at home where he belongs. Like other hounds, the Beagle excels at howling. This trait does not endear the Beagle or his family to their neighbors, especially if all concerned live in an apartment building. Plenty of exercise, attention and training can help forestall a Beagle's impulse to lift his head in song.

The Beagle comes in two varieties: the 13-inch Beagle, which is no more than 13 inches tall at the shoulder, and the 15-inch Beagle, which ranges between 13 and 15 inches tall at the shoulder. Either way, the Beagle is small and can be cute-looking, but he should also look like a dog that can hunt. The dog should have a square muzzle, short back, jaunty tail, long, rounded ears and straight front legs, with hips and thighs that are strong and muscular. The coat can be tri-colored (black, tan and white), or red and white. No matter what color the coat is, though, it should easy to groom and hard to the touch.

Training is crucial to teaching a Beagle how to live properly with his people. Due to his curiosity, the Beagle may be less interested in coming when called than other breeds; for this reason, either secure fencing or a sturdy leash is a must. The breed also has a reputation for being somewhat difficult to housetrain. However, consistent scheduling, regular meal times, and thorough clean-up of accidents can help the Beagle acquire basic bathroom manners. Beagles excel at field trials, agility, hunting, flyball and therapy work.

The Beagle's short wash-and-wear coat requires only a weekly session with a soft bristle brush or a curry comb. Shedding is low to moderate. Like all flop-eared breeds, Beagles are prone to ear infections, so a weekly examination and cleaning session is a must. Weekly pedicures also are a good idea.

Beagles are generally quite healthy, but some dogs may develop back problems such as intervertebral disc disease. Other problems can include allergies, hypothyroidism and epilepsy. Both parents should have OFA certificates (hips) and yearly CERFs (eyes).

© Copyright 2014 LifeLearn Inc. Used and/or modified with permission under license.